Army of Two is an all new third person shooter game that takes you on many two man missions which will test your skills and wits like they have never been tested before. The game is simply fantastic and is very easy to pick up and the graphics are brilliant also but the only downfall is that I found the game pretty easy even when on the hardest setting hence the deduction of one star.

We have also compiled a Review System for this, of which Army of Two is Rated as Four Stars, the second highest possible score available from the Game Review Team. 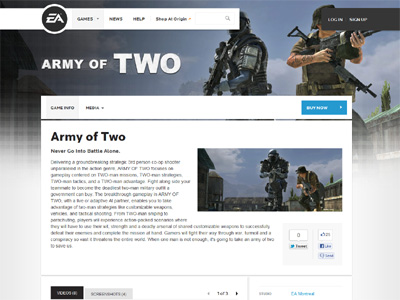 The Website address for Army of Two is: http://www.ea.com/army-of-two