This great new car racing game has become a sensation with Formula One enthusiasts all over the world. The F1 Race Stars game is packed with excellent graphics and sounds, a very impressive creation by Codemasters, this is by far one of the best interactive racing games of 2012.

The Game was released on the 13th November and has reportedly sold out in most UK game stores, we are not surprised as our Game Review team argued who was going to play this great game next. The game is also set with HD which is a fantastic additional feature, which we have tested whilst playing on a 50 Inch screen, with surround sound. The formula 1 elements of game play offer the well known real life racing drivers such as Lewis Hamilton, Mr Vettel and many more, ensuring a realistic balance with this genre of game.

The track curcuits are simply breathtaking, with great attention to detail to the real life tracks as well as the racing driver emotions and skillsets. By far a great game for anyone who loves racing and of course Formula 1.

We have compiled a Review System for this, of which F1 Race Stars is Rated as Five Stars, the highest possible score from the Game Reviews Team. 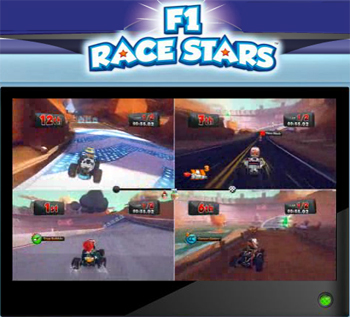 The website address for F1 Race Stars is: http://www.f1racestars.com/en-gb