There have been so many editions of the Mario Kart series that we were slightly dubious when we first received our copy of the new Mario Kart 7 game from Nintendo as we could not see how the last game could have been improved on. The truth is we are very glad we were wrong as we found this new version of the title to be so much better than the last one even though we did not think this was possible.

The game offers all the usual features from the series such as highly detailed race tracks that last forever and have many brilliant features such as jumps and pits. Many of the tracks have taken a whole new life with them now taking place over land, sea and in the air and we can only describe the setting of the races as like being in a dream world. The graphics have been improved but still contain the original feel of the Mario Kart series and run smoothly throughout the game making it thoroughly enjoyable and great fun.

The game play as always is filled with fast paced and highly addictive racing action with all of the usual characters such as Luigi and Bowser. Great game that we absolutely loved and fans of the series will most definitely take this on straight to their hearts.

We have compiled a Review System for this, of which Mario Kart 7 is rated as Five Stars, the highest possible score from the Game Reviews Team. 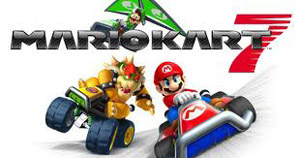