For those of you who are fans of the sport of American football the chance to play a complete management game would seem very enticing just like it did for us so when we first got the all new NFL Head Coach game we could not have been more excited. The game takes players into the chaotic world of the NFL where they will be required to use all of their skill and know how to take their chosen team all the way to the championship title.

We found this game to be incredible, right from the word go and after having played many of the competitors to this game we have to say this is without a shadow of a doubt the best of the bunch. The game as well as all the innovative game play features such as being able to arrange tactics and control the clubs finances has absolutely amazing graphics which are definitely the best we have seen in a game from this genre.

We had so many hours of fun playing this game that we have to recommend it highly to all of our readers as if you love American football this is most certainly one you should have in your collection.

We have compiled a Review System for this, of which NFL Head Coach is Rated as Five Stars, the highest possible score from the Game Reviews Team. 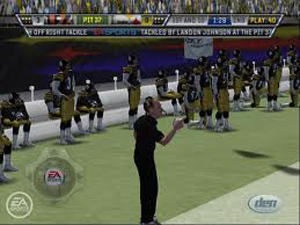 The Website address for NFL Head Coach is: http://www.ea.com/nfl-head-coach