Over the years we have seen many flight simulation games come onto the gaming market but after playing the all new Pacific Squadron WW2 game we can honestly say if you are usually drawn to this type of game then look no further as this title is by far the best of its kind we have ever seen in all our years of reviewing video games. Players will be required to guide their squadron of planes into battle against many enemy forces as you attempt to wipe out all of the German air power. You will be required to clear the skies over many different territories as well as destroying many enemy air bases and targets along the way.

This may sound easy enough but you can take it from us that it is much more difficult than you can imagine and gamers will need to be at their very best if they are to do well in this game. The team at Trickster games have created a monster with this title as the graphics are some of the best we have ever seen and the game play nearly had us dribbling it was that good and this is why we at Game Reviews rate this game so highly. 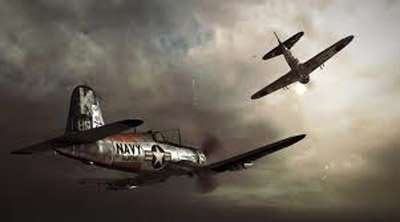 We have compiled a review system, of which Pacific Squadron WW2 is rated as Five Stars, The highest possible score from the Game Reviews team.

The Website address of Pacific Squadrons WW2 is: http://damageincthegame.com/