Planetside 2 delivers an even better experience to gamers than the original game which we never thought was possible as once again you are treated to many great features that have made this series what it is today. Planetside 2  which has been developed by Sony takes players into a futuristic battle where you will experience some of the most striking visuals you will ever see on any game.

One of the best things we found with this game was its extremely innovative game play as it glued us to the screen for hours at a time due to the level of addictiveness it creates for the gamer. The graphics as you would expect from a PC based game are simply stunning with so many contrasts and details that you would be forgiven for thinking you were in a Hollywood movie.

Planetside 2 also offers a huge online multi player feature which makes the game so much better as it adds another dimension to the overall feel of the game and we at Game Reviews love it. We do not feel there is a better game of this type out there right now and thus highly recommend it to our readers.

We have compiled a Review System for this, of which Planetside 2 is rated as Four Stars, the second highest possible score from the Game Reviews Team. 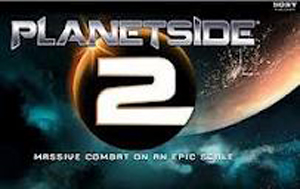 The website address for Sony Online Entertainment is: http://www.soe.com/