Battle Los Angeles takes place in the form of the movie where alien hordes have begun to invade the earth and kill all of its inhabitants. The game thrusts you into a battle for survival against some of the most dangerous creatures man has ever seen and the team at Konami have done a great job as the visual effects really do make the game come to life. Brilliant!

We have also compiled a Review System for this, of which Battle Los Angeles is Rated as Five Stars, the highest possible score available from the Game Review Team. 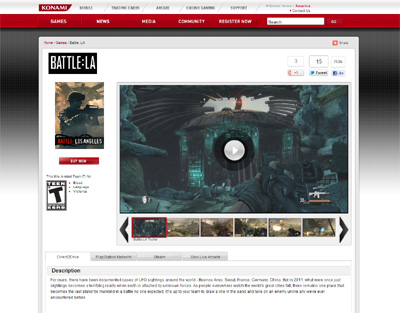 The Website address for Battle Los Angeles is: http://www.konami.com/games/battle:-la