Its been a long time coming but the time is almost upon us where one of the most highly anticipated games releases of the year finally hits our console systems and this could not have come quick enough. The new game Call of Duty Black ops 2 from Treyarch and Activision takes the first person shooter genre to whole new levels as every aspect we saw in the game at the preview event made our mouths water. The game has all the features you would expect from a game in the Call of Duty series and much more and from what we have seen it is a great improvement on the previous edition of the game which came under some fire from leading games critics.

The graphics have been improved so much and are now some of the most visually striking we have seen to date and with the all new map additions within the online multi player facility we are sure that fans of this series will fall in love with game right from the word go. 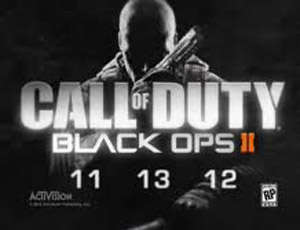 We have compiled a Review System for this, of which Black Ops 2 is Rated as Five Stars, the highest possible score from the Game Review Team.