When it comes to fast paced racing games filled with fun and excitement they come no better than this all new gas Guzzlers Combat Carnage game from the team at Gamepires. For those of you who love the meaty feel of a supped up car then you could not ask for a better game to get your teeth stuck into as we have to say we had so much fun playing this game for many hours.

The game allows the player to choose and then modify the sports car of their choice and then race it against some of the fastest cars on the planet as well as the very best drivers. We found that the game had exceptional graphical content which really does provide the perfect atmosphere throughout the game with beautifully created cars as well as some of the best racing arenas in any game we have played in recent times.

What makes this game stand out from the rest is its innovative game play as it is very easy to pick up with all the controls easily accessible as well as the game being incredibly smooth even during the most chaotic race scenes.

We have compiled a Review System for this, of which Gas Guzzlers Combat Carnage is Rated as Four Stars, the second highest possible score from the Game Reviews Team. 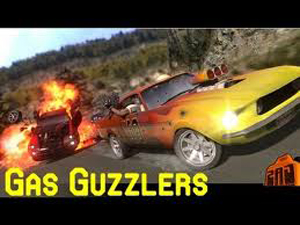