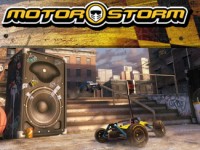 The MotorStorm RC game is a classic racing game, which the team at Game Reviews thoroughly enjoyed reviewing, packerd with fantastic graphics and sounds. The racing game genre has never been so exciting with more and more great games being added to the Console game market place, this game is no exception, a rela gem of a game that almost everyone should enjoy playing.

Here is beginning of a new motor storm, bringing the remote control buggies, car, trucks, vans or motorbikes to life, with fantastic game play options within the game.  The MotorStorm RC game is the best motorstorm we have played since it first began production, the first few were good because it wasn’t RC but bringing RC into the new game has changed our teams view completely, it’s an excellent game.

The game itself is harder to control which we like because it challeneges us more than typical racing games, it also has some new tracks as well as sporting some old classic tracks too. ones from the first Motorstorm edition.  There are in total four tracks named the following; Pacific rift, Monument valley, Apocalypse, and last but not least the most difficult one all the Ractic edge track which gives gamers that “on edge” feeling as most of the track is on ice which ensures you have to be more aware and begin to take more control fo your RC Vehicle.

The whole game is excpetional, ensuring who ever is driving the car is left on the edge of their seats, this is because it has such rough tracks that are made from scraps for example there is the Pacific Rift which no barrriers in place so if you go wide then your out. Being in RC vehicles now allows the track to be bigger for gamers, because you’re in a smaller vehicle. As well as getting a buzz from the tracks and how diffcult they’re you will also still be able to collect trophies for outstanding performances and winning races.

When playing the game our team were over the moon with it, it has everything any previous gamer would want, great music backing tracks, graphics are a touch better, and the layout menu’s are also great. If we could rate it out of 10 then we think we would all be aiming at at least a strong 9/9.5; to get the 10 it could have maybe a different gameplay maybe something like an option to upgrade your car more in depth, but maybe thats us over thinking it a little. Another option that we liked about it is, you can have a free run to get used to the tracks themselves before going out and racing with little knowledges of the tracks.

We have also compiled a Review System for this game, of which the Motorstorm RC Game is Rated as Five Stars, the highest possible score available from the Game Reviews Team. 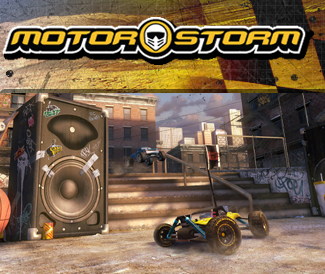 The Official Website for The Motorstorm RC Game is: http://www.motorstorm.com/