For those of you who have been fans of the SimCity series this long awaited new edition of the game will be highly sought after as this series of games has been one of the most popular around for over two decades. From what we saw of this new edition it follows suit to all the previous games but adds so much more to the overall features and facilities of the game which is great news for all you SimCity addicts. The concept of the game is the same where players must control and develop many different cities as best they can and ensure the smooth running of all the services within the city.

The game has so many new features such as the ability to build many more different types of structures as well as power plants and sewage works. The graphics in the game are as you would expect brilliant and some of the most high detailed we have seen in a game of this type. What we saw of the game play it looks very similar to the last game with the exception of it being improved considerably in the way of smoothness and entertainment. Overall we loved every aspect of this new edition and are sure that it will give all its fans some of the best gaming fun they have had in years. 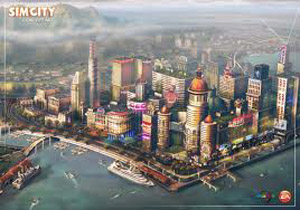 We have compiled a Review System for this, of which SimCity Limited Edition is Rated as Four Stars, the second highest possible from the Game Reviews Team.