The third edition of one of the most successful role play adventure games of all time is nearly upon us and we at Game Reviews were lucky enough to get a sneak preview of the game at the Firefly Studios preview event last week. Stronghold 3 looks brilliant with visually stunning graphics and game play that will make your mouth water and what we saw of the game was incredible.

There are many new features in this new edition such as a much improved building system that allows some of the most realistic design abilities of any of the games from this series. Other features include realistic physics making the fight scenes so much more lifelike as well as dramatic story driven game play and the all new night time siege feature allowing night battles. Players will also be able to play this game in an online fashion with up to four additional multi player modes available to all.

In summary we feel this game is by far the best of the series and we cannot wait to see the reaction from fans of the series when it finally makes its way to our gaming consoles.

We have compiled a Review System for this, of which Stronghold 3 is Rated as Five Stars, the highest possible score from the Game Reviews Team. 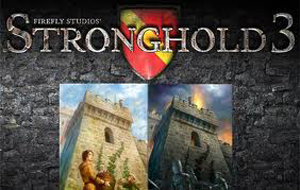