We all know about the Street Fighter series as this series of games have been at the top of ladder ever since they were first implemented into the various arcades and amusement halls in the early nineties. These games were so successful during the early years that we have seen many a game arrive at our doors promising to be much better than the last and in many cases this is true and this is certainly the case with this new game as it is absolutely brilliant and we loved every minute of reviewing it.

Super Street Fighter 4 3D Edition features all the characters we have grown accustomed to as well as a host of new stars which make the game so much more interesting. The game keeps the tournament format which allows gamers to fight all characters on their way to destroying the evil M Bison and his minions. The graphics of this game are superb in every way and are such an improvement on the previous game with all new fight scenes and character details which we have never seen before.

As always where this game excels is in its game play as it is highly addictive and very compelling and tests gamer’s skills completely as you work your way through the various fighting scenes and we have to say it gets the thumbs up from us.

The Price for this game is Rated as Standard for this type of game.
The game is available on the following platforms:

We have compiled a Review System for this, of which Super Street Fighter 4 3D is rated as Five Stars, the highest score possible from the Game Review Team. 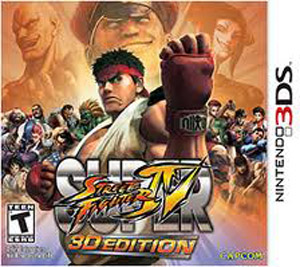 The website address for Super Street Fighter 4 3D is: http://www.streetfighter.com/us/ssfiv3d/