The Chronicles of Riddick Game Review:

The Chronicles of Riddick: Assault on Dark Athena is the all new edition of the gaming series that has taken the world by storm since its first release. The game has some of the most detailed graphics I have ever seen on any adventure based game and this coupled with the brilliant story line and game play engine makes this a true masterpiece.

We have also compiled a Review System for this, of which The Chronicles of Riddick is Rated as Four Stars, the second highest possible score available from the Game Review Team. 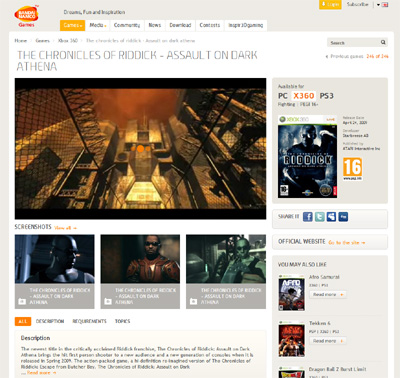 The Website address for The Chronicles of Riddick is: http://www.uk.namcobandaigames.eu/product/the-chronicles-of-riddick-assault-on-dark-athena/xbox-360