When we first got the all new Darksiders 2 game we were highly excited as after playing the original game we knew that we would be in store for something special with this new edition. The fact is we were slightly disappointed with this new addition to the series as it failed to deliver on the same level as the previous game which was gutting for us as we had such high aspirations for the game.

The title continues from where the last game left off with players needing to battle their way through countless levels filled with mayhem and deadly dangers. One thing we could say about this game is that the graphics involved within it are the best feature of the game as they are simply stunning in every way from the highly detailed backdrops and landscapes to the fast paced and riveting fight scenes.

It is a great shame that this title did not live up to our expectations as we had hoped for a masterpiece and this is a word we most definitely would not use to describe this game after reviewing it.

We have compiled a Review System for this, of which Darksiders 2 is rated as Three Stars, the third highest possible score from the Game Reviews Team. 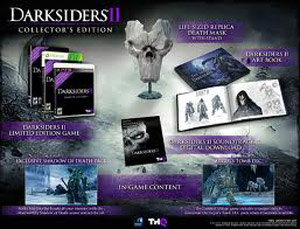