Well it has been one of the best boxing games ever to be released for many years so our dedicated team of reviewers have decided to review this classic boxing game. The real deal returns with his very own boxing game and as you would expect from a title which has been created by Sega the game is absolutely brilliant in almost every way. Ok so the graphics may be not be the best you will ever see but this does not matter as the game itself more than makes up for the lack of graphics.

This game at the time of its release was completely revolutionary and offered many aspects that had never been seen before in a boxing game and if we tell the truth ever since this game was released we have seen more and more of these features appear on other boxing game titles. The game is highly addictive to say the least and we must warn you it can cause arguments as when your competitive side comes out you cannot help yourself. All in all Evander Holyfields Real Deal Boxing is a great game so we just had to include it in our reviews of the best boxing games around. 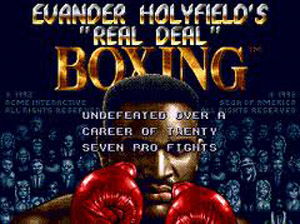 We have compiled a Review System for this, of which Evander Holyfields Real Deal Boxing is Rated as Four Stars, the second highest score from the Game Review Team.