Showtime Championship Boxing which is available exclusively for the Nintendo Wii is a great new boxing game that has had mixed reviews from the gaming world. I have found it to be good at best as the graphics are not the best in the world but saying this the game is very addictive which in many ways makes up for this.

We have also compiled a Review System for this, of which Showtime Championship Boxing is Rated as Two Stars, a fairly good score from the Game Review Team. 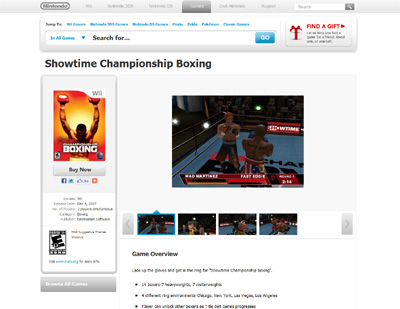 The Website address for Showtime Championship Boxing is: http://www.nintendo.com/games/detail/p7VWFuF-w-aeWJsmGBKWOo4iUu_CNlkT