G1 Jockey 2008 for the Nintendo Wii is a completely revolutionary new horse racing game which takes full advantage of the wireless functionality of the worlds leading games console. After playing many games of this over a few hours I found it to be very good in every way but like all horse racing games became quite boring after a while as I am not a big fan of the genre but I can see it being a huge hit around the gaming world.

We have also compiled a Review System for this, of which G1 Jockey 2008 is Rated as Three Stars, the third highest possible score available from the Game Review Team. 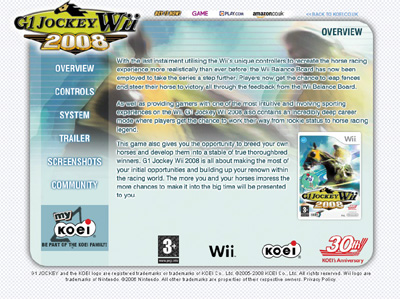