House of the Dead Overkill

Well if you love blood, guts and gore than have we found a game for you in the form of House of the Dead Overkill as it contains all of these features as well as many more and we have to say we found the experience of playing this game thoroughly enjoyable.

The plot of the game is for gamers to survive the onslaught of flesh eating zombies who are hell bent on chasing you until they have the chance to eat you alive and add you to their ranks. We found the game to be highly enjoyable in every way and offered so much to get you teeth stuck into that we just could not get off it once we had begun playing it. The graphics as you would expect from a title from Sega are some of the best we have ever seen in the horror genre with many extremely realistic scenes that will be sure to have you hiding behind the couch.

The game play is highly addictive also and kept us bust for many an hour and with so much to do within the game we are sure it will be a huge hit around the gaming world. Top game all round and if gore is your thing you will most certainly not want to be without this game as it is simply sensational.

We have compiled a Review System for this, of which House of the Dead Overkill is Rated as Five Stars, the highest possible score from the Game Reviews Team. 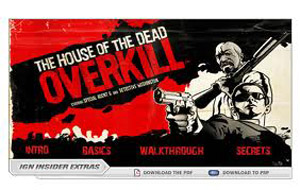 The website address for House of the Dead Overkill is: http://www.sega.com/hodoverkill/