It has been a long time coming but this October one of the most highly anticipated games of the year finally lands on our gaming consoles and we at Game Reviews were lucky enough to get a sneak preview of what is in store in this new edition of the Medal of Honor Warfighter game.

This all new version of the game once again thrusts gamers into the complex world of modern day military combat where the gamer must use all of their skills and know how to complete a wide variety of tactical military missions. What we saw of this game was phenomenal as there are so many new missions and challenges to participate in from basic search and destroy missions to recon and advanced surveillance.

Then game has been improved greatly in regards of graphics as the team at EA Games has taken note of what gamers required from the last edition perfectly. All of the visuals now contain so much more detail which gives one of the most realistic feels of any game of this genre we have ever played so far. Another great improvement is that of the game play as it is now much more fluent with brilliant continuity as well as the ability to access many more all new features easily throughout the game.

We have to say this is definitely one to watch out for and we are sure many of our readers will absolutely love this new edition from the Medal of Honor team.

We have compiled a Review System for this, of which Medal of Honor Warfighter is Rated as Five Stars, the highest possible score from the Game Reviews Team. 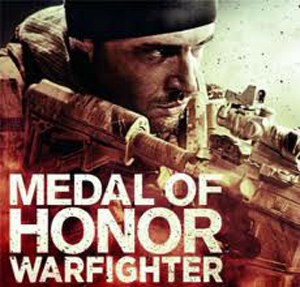 The website address for Medal of Honor Warfighter is: http://www.medalofhonor.com/en_GB