Space battles and intergalactic wars well if these are two things you love in your video games then we are sure you will really want to hear about this all new game from the team at Nintendo called Star Fox 64 3D. This great new game takes player into the world of futuristic space where the galaxy is under attack from enemy forces who are looking take over the whole area and destroy anyone in their way.

The game is filled with action scenes that will leave you dribbling for more as you participate in dogfights against enemy space ships as well as taking missions behind enemy lines to eliminate enemy installations. The graphics of the game were not as good as we expected but they were still very good although we found them quite limited and primitive in some areas but the game is still very enjoyable. Again with the game play it was not the best we have ever played as it felt quite repetitive in parts as the scope of the game has many boundaries it cannot cross.

When all is said and done though the game is certainly worth buying if this type of game is for you as we enjoyed it but it could have been better.

We have compiled a Review System for this, of which Star Fox 64 3D is Rated as Three Stars, the third highest score from the Game Reviews Team. 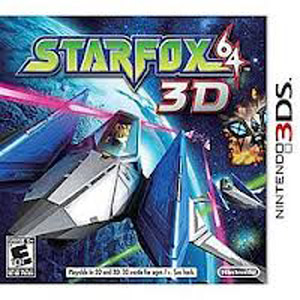 The website address for Star Fox 64 3D is: http://starfox643d.nintendo.com/