For many years the Metroid series has been entertaining gamers for countless years as games from this series always offer one of the most exciting gaming experiences of any game in their class and thus have become completely iconic. Metroid was one of the earliest first person shooter games ever to make it on to gaming consoles and in these games we have seen some of the craziest concepts and fight scenes we have ever seen in any game.

The new Metroid Prime Trilogy edition provides gamers with the last three Metroid games so you can now play them at your leisure whenever you wish and all on one single disk. The games have state of the art graphics and game play to die for so if you have always wanted these games then we would suggest getting them now.

The Game Reviews Team love these games so much that we have included them into our top 100 best games of all time list which will be completed shortly so keep your eyes peeled.

The Price of this game is Rated as Standard for this type of game.

We have complied a Review System for this, of which Metroid Prime Trilogy is Rated as Four Stars, the second highest possible from the Game Reviews Team. 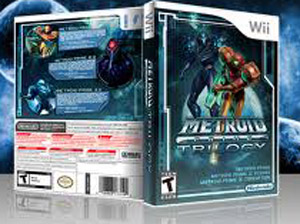 The website address for Metroid Prime Trilogy is: http://metroid.com/primetrilogy/#/home