If you enjoy playing Galactic War games then the all new PC Game Nexuiz is an absolute must play game for anyone who loves this type of game genre. The team at Game Reviews have played the new Nexuiz Game for over 6 hours and have been very impressed by the amount of Battle Arenas that are intagrated into this fantastic inter planet shoot em up game. The technology that has developed by THQ is very impressive, with the enhanced Cry 3 powered engine graphics on offer, this makes a massive difference for an enjoyable and realistic gaming experience.

The game play covers the  2 familiar family wars between the Kavussari and the Forsellians, who battle it out in an inter galactic war, the game offers incredible sound and graphic quality to match. There are many options to this game, from Mutations to a fantastic tournament system including leader boards and a wide selection of gamer communication methods via Facebook, Twitter etc.

Overall this game is quite simply outstanding and one to buy for anyone that loves a challenging game. 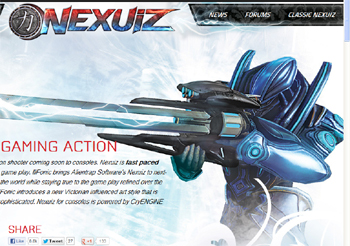 PC – More devices to be announced.

We have compiled a Review System for this, of which the Nexuiz Game is Rated as Five Stars, the  highest score from the Game Reviews Team.

The website address for the Nexuiz Game is: http://www.nexuiz.com/