NHL 2013 is one of the most authentic hockey games ever made, an absolute classic offering performance skating and much more. From start to finish this hockey game grips you into a very competitive mode, as if you were playing for real. The NHL player graphics are very realistic and offer a smarter gaming experience with state of the art Artificial Intelligence features, ensuring other players know who is were within the game. This feature alone offers a great sense of realism, one that a lot of other sporting games should have too.

The Goalkeepers within the game seem to have much more moving options, making them more flexible to make those important saves. The Ultimate team options allow a very exciting extra, in developing the best Hockey Team squad possible, we are sure this feature will go down very well with the more discerning hockey fans. The sound effects and animation features are out of this world, offering a fantastic realistic gaming experience, it really is in a class of its own.

All in all this is an outstanding New Edition from EA Sports, one that has wowed the team at Game Reviews.

We have also compiled a Review System for this, of which the NHL 2013 Hockey Game is Rated as Five Stars, the  highest possible score available from the Game Reviews Team. 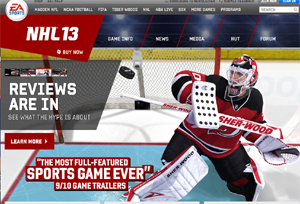