In general we are not too big a fan of games such as the Pokemon series so the prospect of reviewing a game which was basically Pokemon gone medieval was not one of the most exciting feelings we have ever had. On first glance Rainbow Moon looks very primitive as the graphics are very basic throughout the game and offer nothing new to what we have seen in other games like this in the past few years. Not to say the graphics are bad but just that they were lacking in any real cutting edge and we felt the developers had played it much too safe with this title.

The game play is actually very good for a role play game and we found that the more we played it the more we enjoyed it so the game is not a total write off. All in all this game is not going to blow your minds away but it is still a good all round game which we are sure fans of the genre will enjoy.

We have compiled a Review System for this, of which Rainbow Moon is rated as Three Stars, the third highest possible score from the Game Reviews Team. 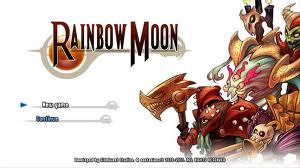 The website address for Side Quest Studios is: http://www.sidequest-studios.com/