Sins of a Solar Empire Rebellion

Well for you fans of the science fiction space genre have we got a treat for you in the shape of the all new edition of the Sins of the solar Empire Rebellion series which has been one of the most highly anticipated games of this type of the year so far. Players will once again undertake the ferocious battle between good and evil as war rages across the galaxy with evil enemies at every corner who are hell bent of wiping you and your people off the face of the planet.

We found this game to be highly exciting as it features very innovative concepts which reallydo stretch your imagination futher than we ever thought possible in this type of game. The game which has been created by the team at Ironclad Games contains some of the most stunning visuals and imagery we have ever had the pleasure of seeing in a game of this type and this fact is what makes this game so good and more importantly believable.

Game play wise again this game is tremendous to put it mildly as it offers you everything you could wish for from its creative stroryline to the way the characters move around the game. All in all we have to say we love this game so much and just have to give it a good rating as we have seen no better this year.

We have compiled a Rating System for this, of which Sins of a Solar Empire is Rated as Four Stars, the second highest possible score from the Game Review Team. 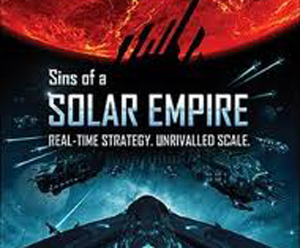 The website address for Sins of a Solar Empire is: http://www.sinsofasolarempire.com/