Well it has been a game that has been entertaining gamers ever since the late eighties and has remained at the top of the platform game genre for virtually all of this time and now with the latest edition Tetris Party Deluxe we have been treated to another phenomenal game.

The game once again provides you with the ultimate puzzle based game as you attempt to guide the endless blocks into the free spaces to eliminate the ever growing structure in the game area. As many of you will know this form of game is highly addictive and in this new edition it is now being taken to all new heights with many new bonus features and rounds which are extremely enticing.

Graphics and game play are some of the best we have experienced form this series and offer everything you would expect and more from this series of games and this is why we rate it so highly.

We have compiled a Review System for this, of which Tetris Party Deluxe is rated as Four Stars, the second highest score possible from the Game Reviews Team. 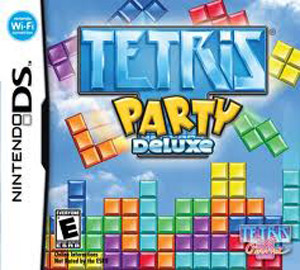 The website address for Tetris Party Deluxe is: http://www.nintendo.co.uk/NOE/en_GB/games/nds/tetris_party_deluxe_18589.html?system=none