The Sonic Generations game has been created to commemorate the twentieth anniversary of this critically acclaimed and extremely popular gaming series which has been at the forefront of platform gaming for almost two decades. As with all the Sonic the Hedgehog games you are in for a completely revolutionary ride across countless levels as you attempt to destroy Dr Robotniks plans of taking over the land.

This new version of the game incorporates many of the features we have seen in each of the games we have enjoyed so far from the series as well as throwing in all new aspects of the game that really do add to the overall feel of the game. Sega has attempted to revolutionize the graphics engine of this series and they have done a fantastic job as the graphics involved in this title are without a doubt some of the best we have seen as they are so realistic and smooth running.

Game play is the part of this game that made us give this such a great review as it is highly captivating and enjoyable and offers so much more than the previous games as the story line is much more comprehensive and we absolutely love it.

We have compiled a Review System for this, of which Sonic Generations is Rated as Four Stars, the second highest score from the Game Reviews Team. 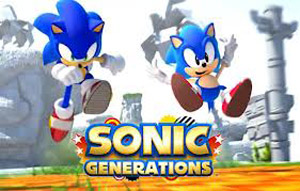