The Spellforce series has become one of the most popular role play game titles in the world today which has gained millions of gaming fans from across the world ever since the series began a few years back. Now with the new expansion pack available being Spellforce 2 Faith in Destiny, we see many all new features come to life which we have to say adds so much more to the overall feel and enjoyment of the game and we have to say it mesmerized us right from the off and we love it.

Players will need to lead their characters into many different battles as they fight numerous enemies of the land as well as mythical creatures such as dragons, trolls and evil dwarfs across many different landscapes. One of the best features of this game is the ability to switch from an above view to a third person view which is great for fighting scenes as you will find much more control over your characters.

The graphics within the game are slightly basic but still offer all round good visuals which really do depict the overall setting of the game and this coupled with the innovative and exciting game play is what makes this game so good all round and we feel it is totally brilliant.

We have compiled a Rating System for this, of which Spellforce 2 is Rated as Four Stars, the second highest possible score from the Game Review Team. 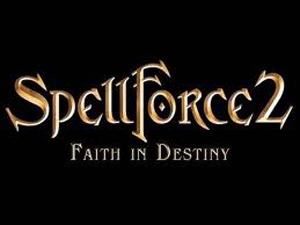 The website address for Spellforce 2 Faith in Destiny is: http://www.spellforce.com/