The cold war is one of the most interesting time periods after the Second World War and there have been many games which have tried to capture the feel of this era but many of these games have failed dramatically. This though is not the case though with this all new game from the team at Paradox Interactive which builds on the huge success of the Supreme Ruler 2010 and 2020 games.

Supreme Ruler Cold War Players will be faced with a world filled with espionage and deceit as they try to ensure their countries safety whilst doing all they can to avoid nuclear warfare. Players will also need to be involved with many different types of political decisions between the United States of America and Russia as both of these titanic countries head towards all out war. The game is filled with beautifully created scenes which capture the essence of the era perfectly and every bit of graphical design has so much detail on it that you could be forgiven for thinking you were watching a movie.

In regards of game play this is where the game is at its best as there is so much to do throughout the game that it can have you glued to your screens for hours on end as every aspect of the game is so enjoyable.

We have compiled a Review System for this, of which Supreme Ruler Cold War is Rated as Five Stars, the highest possible score from the Game Reviews Team. 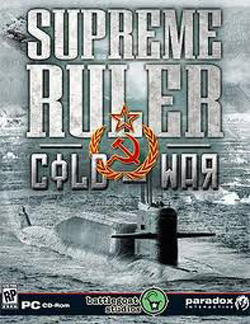 The Website address for Supreme Ruler Cold War is: http://www.paradoxplaza.com/games/supreme-ruler-cold-war