This all new Wrestling Game takes the fast paced and highly entertaining world of professional wrestling to whole new levels and is as far as we are concerned one of the top three best wrestling games we have ever seen to date. Players will be able to experience the hustle of bustle of the wrestling world and lead their favourite wrestlers into many bone breaking battles in your search for the glory and prestige of becoming the world wrestling champion with the TNA Impact Wrestling  game.

The game has many different wrestlers from the official TNA roster and these wrestlers can be used to perform in a wide variety of matches such as royal rumbles, cage matches and ladder matches among others. Like with any game from Midway you will find that the graphics involved in this game are very good indeed and offer a very clear and concise concept of the wrestlers across all weight divisions.

The game play again is fantastic and as there is so many different match types and challenges you will find it pretty hard to find a more complete and enjoyable wrestling game. We rate this game so highly as it has given us so many hours of gaming pleasure and we just hope you have the chance to enjoy it as much as we have during our reviewing process. 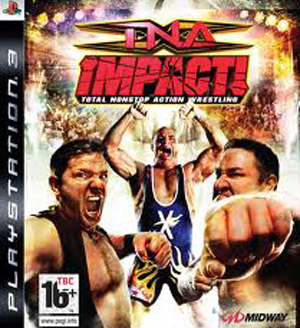 We have compiled a Review System for this, of which TNA Impact Wrestling is Rated as Four Stars, the second highest possible score from the Game Reviews Team.

This Game is also available for the IOS Operating System, just visit The Official NAMCO page for this game: http://namcobandaigames.com/ios/tnawrestling