Arsenal of Democracy takes players on a journey through one of the most difficult and historic periods the world has ever seen and we have to say this game is great fun right from the word go. The aim of the game is for players to take control of any nation of their choice and them lead them through the whole course of world war 2 using all military forces at your disposal to defend your country.

What we really like about this game is that it enables players to see the world war through the perspectives of many different countries as they attempt to defend their borders or on the other hand complete invasions of the lesser countries. There is a wide variety of weaponry available for players to use which include aircraft, sea craft as well as the obvious ground forces which were so formidable during this time.

The games graphics are brilliantly created in every way and really does capture the essence of the period perfectly and thus makes the game so much more enjoyable. Overall this game is brilliant and we cannot recommend it enough to all of our readers and we are sure you will love it as much as we do.

We have compiled a Review System for this, of which Arsenal of Democracy is Rated as Five Stars, the highest possible score from the Game Reviews Team. 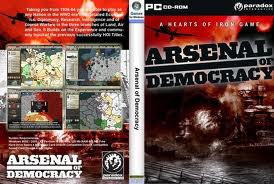 The Website address for Arsenal of Democracy is: http://www.paradoxplaza.com/games/arsenal-of-democracy