Those of you who played the original Galaxy on Fire game will know exactly what you are in store for with this all new edition as once again the galactic battle rage through your gaming devices. This brilliant science fiction game takes place in a futuristic world where you are at war with an alien force that are determined to conquer the Earth and all that stands in their way is you.

Galaxy on Fire 2 itself offers some of the most addictive and fast paced action of any game from this genre as it provides many all new and innovative features that really do make it one of the best games out there. The graphics within the game are completely eye catching with many great visuals and backdrop locations which are depicted perfectly throughout the game. One of the best things about this game is that you can take the battle to the aliens in any way you wish as you have a huge array of weaponry and spacecraft to make use of and the battles within the game are brilliant.

We are sure you will love this game as it is most definitely one of the best we have played in all our time of reviewing games.

We have compiled a Review System for this, of which Galaxy on Fire 2 is Rated as Four Stars, the second highest possible score from the Game Reviews Team. 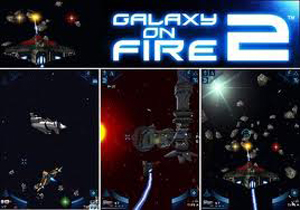