Like with all video games created by Sega we expected to be given a brilliant and revolutionary game when Infinite Space first arrived at our doors but we have to say we were very disappointed once we had actually played the game for a few hours.

The plot and story line just seem to be so familiar as they have been used in so many games like this so there is nothing new and revolutionary about that aspect of the game. The graphics don’t fare much better as they are very primitive and to tell the truth it is like playing a game from the nineties rather than 2012. Although we fully appreciate these types of Retro Games are becoming more popular, so our opinion compares to mainly the new mainstream types of games.

The only saving grace of this game is that it does have the tendency to keep you engrossed for long periods of time but we do not know why so all is not lost on this title. In summary we were  disappointed with infinite Space as it failed to add anything new to the genre, however applaud Sega in producing somehing different and Retro.

We have compiled a Review System for this, of which Infinite Space is Rated as Two Stars, the second lowest score possible from the Game Reviews Team. 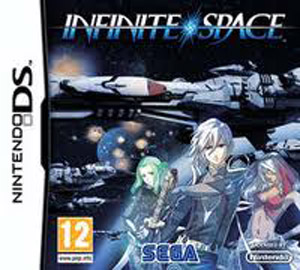