We have been treated to some of the best first person shooter games in recent times and some of these have come from the Red Faction series of games so when we first received our copy of the all new Red Faction Armageddon we did not know what to expect so we got ourselves comfortable and began to see what this game had to offer. Right from the opening moments of the game we could see just how well this game had been created as the introduction scenes were so much better than the ones we had experienced in the previous games and were so visually striking.

The game itself carries on the tradition of being extremely easy to get to grips with the menus and so on being very easy to navigate. The plot of the game is also very well created and offers many different twists and turns which allow players to choose their very own story line paths so the game can go in any direction you the gamer wishes. The graphics are a big improvement on the previous game with beautfiully created characters and fight scenes which look so realistic you would be forgiven for thinking you were watching a movie. Game play is one of the best aspects of this game as it is completely enthralling in every way and extremely smooth running.

All in all we found that we loved this game completely and it was one of the most addictive games from this genre we have ever played so well done THQ on this masterpiece.

We have compiled a Review System for this, of which Red Faction Armageddon is Rated as Five Stars, the highest possible score from the Game Review Team. 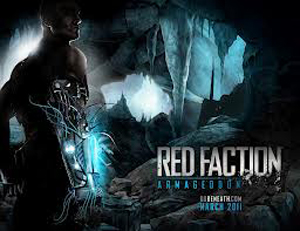 The website address for Red Faction Armageddon is: http://www.thq.com/uk/red-faction-armageddon