This all new game from Bohemia Interactive takes us back to the days where strategy based military games were created to be hard and very challenging and we can tell you this the developers have hit the nail right on the head with this new edition of the Carrier Commander series. Carrier Command Gaea Mission thrusts players back into the world of military combat as you find yourselves involved in battles and conflicts across many different landscapes.

The game is very enjoyable and we could tell the amount of work that has gone into it as it delivers its effect better than any other game of this genre we have played in the past few years. Graphically it is also very good with fast flying battle scenes that really do encase a huge amount of realism throughout which makes the game so much more enjoyable. Overall we felt Carrier Commander Gaea Mission was well worth playing and we can see it doing rather well in the gaming world.

The game is available on the following platforms:
Computer/PC/Laptop

We have compiled a Review System for this, of which Carrier Commander Gaea Mission is rated as Four Stars, the second highest possible score from the Game Reviews Team. 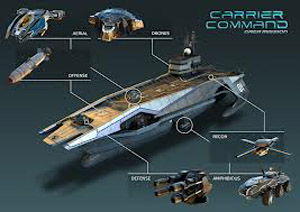 The website address for Carrier Commander Gaea Mission is: http://www.carriercommand.com/