World of Tanks is the military strategy game that everyone has been talking about as it provides something never before seen in a game from this class and it is completely revolutionary. World of Tanks offers its players the chance to experience the hustle and bustle of all out heavy armour warfare as you choose from over 150 world war two onwards tanks. Players must use these tanks to gain position over their opponents by deploying their forces in strategically thought out positions where you will be able to gain the advantage over your opponent.

The game itself is very good and really interesting as we found that even with no real military strategy knowledge we could compete fairly well so the game was much more easy to enjoy. All of the tanks have a wide array of weaponry which comes in handy when you get into the full swing of the battle as choosing the right weapons for the job is one of the most important parts of the game.

The graphics are very well created and really depict the setting of the game perfectly as it has a raw steel edge about it and we feel it is one definitely to watch out for in the near future.

We have compiled a Review System for this, of which World of Tanks is Rated as Four Stars, the second highest possible score from the Game Reviews Team. 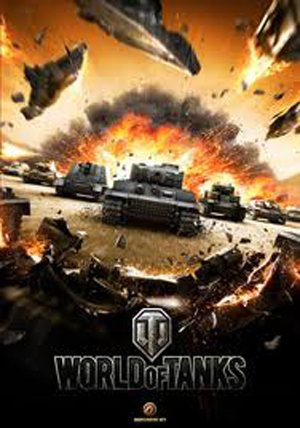 The website address for World of Tanks is: http://worldoftanks.eu/