Its been a while since we got the chance to play a riveting and compelling strategy based game so when we first received our copy of Ghost Recon Shadow Wars we could not wait to put it through its paces. The basic aim of the game is to position and deploy your military forces against opposing forces and attempt to gain as much territory as possible.

Even though the game is for the Nintendo DS we found that its graphics were very good as everything is positioned perfectly for ease of use and even if you are new to the game you can pick it up in minutes. The game has some very good levels and challenges to complete which earn you more weaponry such as heavy armour and air support. We played this game for almost a whole day and loved every minute of it as it takes a lot of brain power to be successful but is also brilliant fun and a much better game than previous games of this type we have played.

All aspects of the game play have been well thought out and go together seamlessly all through the game with perfect continuity which makes the game so much more believable. All in all Ghost Recon Shadow Wars is more than worth the price and we can see it doing very well with gamers as if they love it half as much as we do they will be very happy.

We have compiled a Review System for this, of which Ghost Recon Shadow Wars is Rated as Five Stars, the highest possible score from the Game Reviews Team. 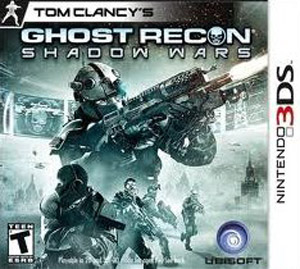 The website address for Ghost Recon Shadow Wars is: http://www.nintendo3ds.ubi.com/portal/en-US/browse/ghost-recon/